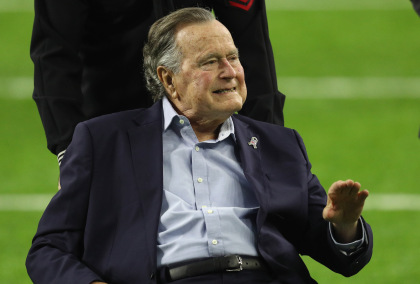 This past week our 41stpresident of the United States George Herbert Walker Bush passed away. He was 94 years old.

Like most of you, I yearn to find those brief and random moments of civility as I scan the papers or scroll through the sound bites on my phone.  I was thrilled to read the tone of the reporting on the former president’s passing.  The New York Times reported that when James Baker, the former president’s secretary of state appeared at Mr. Bush’s side sometime during his final days Mr. Bush suddenly grew alert and asked “Bake, where are we going?”  Baker replied “We’re going to heaven.”  The president responded “That’s where I want to go.”

The Washington Post offered a wonderful reflection of Mr. Bush as a high school senior when Pearl Harbor was attacked on December 7, 1941.  Instead of choosing the security of Yale, he enlisted.  Before he was 19 years old he was assigned to fly torpedo bombers off of aircraft carriers in the Pacific.  On a sortee toward a Japanese island Bush’s plane was shot down.  He commanded his crew to eject before the plane crashed into the sea.  Miraculously Mr. Bush survived.  His two crew members died.

CBS’s Sunday Morning had a reporter who recalled the 1987 Newsweek cover story of George Bush that labeled Mr. Bush ‘a wimp’.  The reporter said man did we get it wrong.

This is the paradox of humility.  What looks like weakness is actually strength.  Thomas Merton might say when you’re humble you’re living a second half life, a fuller, richer and more meaningful life than the false impression that a first half life wants us to believe.

We applaud humility but would rather not wear those shoes ourselves.  It takes too much sacrifice, too much risk, too much vulnerability. We fear how we’ll be seen (weak). We fear being taken advantage of. We fear we’ll miss out on something. Which is true, but in an ironic way.

Another article highlighted the relationship that Mr. Bush nurtured with another former president, Bill Clinton.  With the game clock expired neither one had anything to do against the other so they joined forces.  They used their heavy weight influence to raise hundreds of millions of dollars for charities.

It’s ok to think that it’s hard to be a strong leader today.  It probably seems that every day there are multiple forces working against you, some as simple as a flight delay to an important meeting and others complicated like a poorly functioning salesperson or manager.  It sure helps to have something to believe in, or maybe multiple things to believe in. Your strength needs a rock solid base.

As for lovely comment, that came from Mr. Bush’s longtime friend Mr. Baker during the 60 Minutes interview.  Mr. Baker was emotional.

I watched the interview at our kitchen table with my wife Sunday evening and said to her “when was the last time you heard a man call another man lovely?”